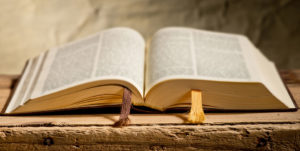 Lectio Divina is a traditional monastic spiritual practice that combines scripture and a form of contemplative prayer.  It has recently become popular among contemplative Christians as a way to a deeper prayer experience.  It is also one of the practices we have taught in our Spiritual Practices for Your Work Life retreats.

The Origin of Lectio Divina

Lectio Divina as a term has been present within the Christian tradition since at least the time of Origen (190ce), though the meaning has varied somewhat over time.  Origen used the term to refer to a prayerful (probably contemplative) reading of scripture with a desire to discern the hidden meaning.  For later users, such as Ambrose, Augustine, and Benedict, the term was used in a similar manner – referring to a prayerful, contemplative reading of scripture in the hope that God will reveal himself in a deeper way.

In the twelve century, a Carthusian monk and prior named Guigo II developed a four step process that eventually established the pattern for the process we know as Lectio Divina today.  As he said in his book The Ladder for Monks: A Letter on the Contemplative Life:

One day while I was occupied with manual labor I began to reflect on man’s spiritual work, and suddenly four steps for the soul came into my reflection: reading, meditation, prayer, contemplation.   This is the ladder for monks by which they are raised from earth to heaven.

While it is unclear whether Guigo thought in terms of a single exercise, this four step process nevertheless became the basis for what we know of as Lectio Divina.

Guigo’s four steps can be understood as follows:

Reading (Lectio): The passage of scripture is read in its literal or natural sense, without applying theological or historical presuppositions.

Meditating (Meditatio): By meditation, Guigo meant to ponder the passage and consider its lessons and meaning for our lives.  This is different from what we usually think of as meditation and is a more analytical process.  The analysis is not, however, focused on issues of historicity or dogma but rather on the meaning of the passage for the participant.

Prayer (Oratio): In this step, we set aside the analysis and the cognitive activity of the second step and turn to God in prayer.  Ideally the second stage will have informed our prayer in some manner, leading us to ask for guidance, resolution, or perhaps something else.  By turning our attention towards God, and listening, this step also prepares us for the final stage.

Contemplation (Contemplatio): In this stage we let go of all thoughts and images and just rest in God.

While the image of a ladder suggests we are moving in one direction, and in an important sense we are, the process as laid out here means that each stage requires a different type or mode of mental activity.  In the first step we are absorbing information in the form of the scripture we are reading.  In the second we are using our faculties to consider the meaning of the passage.  In the third, we are leaving the analytical processes behind and turning our attention towards God in preparation for the fourth stage in which ideally we have shut down the mental processes and have moved into a contemplative or unitive state.  Each step informs and lays the foundation for the next step, but each also requires a transition away from the mental state of the prior step.

Instructors of Lectio Divina sometimes suggest that the process should focus on affect and avoid cognitive processes such as reasoning and analysis; in effect they shortcut the second step, and maybe the first.  This has the advantage of making it easier to enter a contemplative state while minimizing the interference of thoughts.  This might be better for some participants, but we should recognize that it effectively eliminates Guigo’s second step and therefore is not the same process that he recommended.

One should experiment with different approaches to determine which seems to be most helpful. In light of this, the following presents two different approaches to Lectio Divina – the first representing Guigo’s ladder more faithfully, in a 30 – 90 minute exercise, and the second representing an approach that replaces the analytical or cognitive aspect of the second stage.

Option A: Lectio Divina Based on Guigo’s Ladder

As always, one should experiment to see which approach works best given individual proclivities and circumstances.

By the way, if you might be interesting in hosting or participating in our of our Spiritual Practices for Your Work Life retreats, please send us an email.