Charles Marsh on Bonhoeffer Without a Church 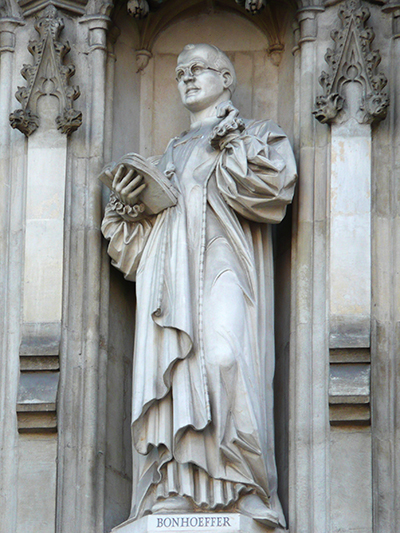 One striking aspect of Charles Marsh’s new biography about Dietrich Bonhoeffer is the degree to which Bonhoeffer’s church seemed to disappear.  For someone as committed to, and embedded within, the church as Bonhoeffer, this must have been a highly distressing experience.  How the experience seemed to affect him can have important lessons for us.

Change within the Church

In the mid-thirties, the majority of Germany’s Protestant churches joined the so-called German Church movement (the Reich Church) that pledged its loyalty to Hitler as the head of the church and that willingly accepted a degree of Nazification into its theology.  The remnant that strived to keep the faith (refusing Nazification and continuing to proclaim Christ as the head of the Confessing Church) was gone by the end of the decade; its members either accepted Nazification, or they were incarcerated, conscripted, or killed (usually in the war).

Bonhoeffer had hoped to keep the Confessing Church alive by connecting it to the international Christian community; however, even the Ecumenical Movement, which became the World Council of Churches, refused to recognize the Confessing Church in deference to the Nazified and much better established Reich Church movement.

Thus, Bonhoeffer was a pastor and theologian without a church and without a connection to institutional Christianity (except for a handful of foreign church friends).

How Did He React?

Paradoxically, the experience appears to have resulted in deep spiritual growth resulting from extensive contemplation.   Marsh (2014) paraphrases a letter Bonhoeffer wrote to his best friend Eberhard Bethge in June1942, nine months before his arrest:

He wanted Bethge to know that the arc connecting the disciple to the physical world extended farther than he had ever imagined. He felt singularly open to “the worldly [werealm”— intrigued and “amazed” by life. “I am living, and can live, for days without the Bible,” he said. But when he opened his Bible again after an absence, he could hear and experience the “new and delightful … as never before.” “Authenticity, life, freedom, and mercy” had acquired a new significance for him. A worldliness heretofore unknown was unexpectedly refreshing his spiritual being, and with it he felt a growing aversion to all things “religious.” What a glorious discovery, the vast new spiritual energies he was feeling! It was an impulse to let things take their own course and try his best not to resist. It was his first intimation of spirituality outside the church (p. 333).

Undoubtedly, Bonhoeffer would have preferred a church to which he could belong, and he certainly missed preaching and the other forms of participation; this explains why he gave much thought to the church’s re-establishment in the postwar future.

Nevertheless, it is worth reflecting on whether or not there was something spiritually liberating about being released from ecclesiastical tradition, as it seemingly enabled Bonhoeffer to shift his focus and to find God’s presence in the entire world — not just in the explicitly religious realms. Through Bonhoeffer’s evolution of faith, we see an increased appreciation for life in the world apart from religious formalities.

This is certainly not an argument against the church or Christianity or even formal religion, as it is unlikely that Bonhoeffer would want his words to be taken as such; however, it is a suggestion that sometimes it is good to broaden our religious or spiritual orientation to enable ourselves to become aware of or to find God in all settings (not just the overtly religious) such as in our daily work.